The 5 best travel gadgets for your flight

1. Use your Air Pods on the aircraft's entertainment system 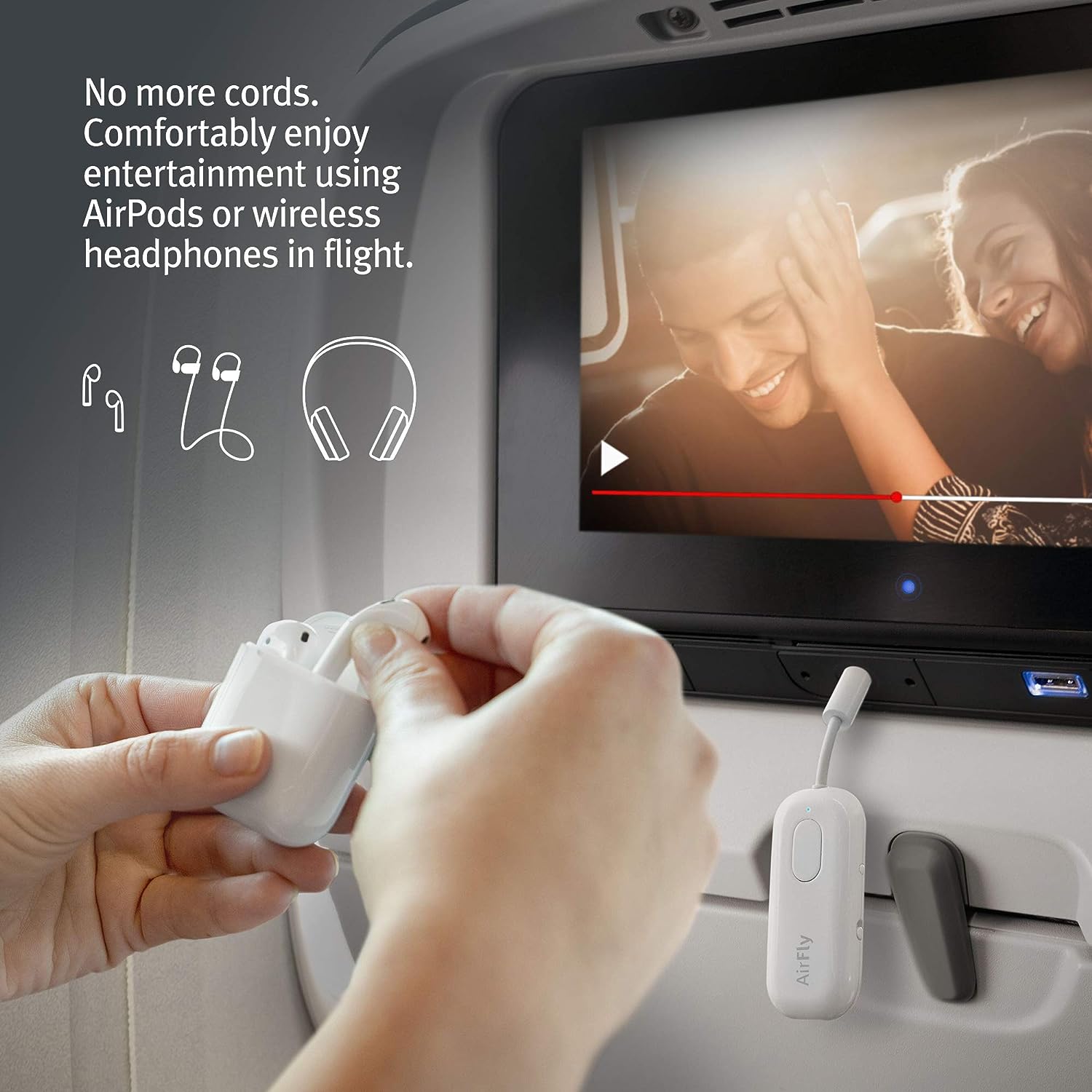 Over the past year, many have seen the benefit of acquiring a wireless headset, and especially Apple's Air Pods have become very popular. One avoids a wire chaos, and can instead enjoy that it all goes wirelessly. However, there is a problem with Air Pods, namely that they do not fit into the aircraft's entertainment system. That is why you can get a pair of AirFly Pro, which has an audio jack you can put in the aircraft's entertainment system, and from here AirFly can send the audio signal on to your Air Pods wirelessly.

It is possible to connect two Air Pods on an AirFly so you can watch the same movie together. AirFly has a battery life of 16 hours, so it should not be necessary to charge it during the trip.

Something that can help a lot making the flight more comfortable is to be able to shut out as much noise as possible. The sound of the aircraft engines is very constant and a Noise canceling headset can remove some of this noise. So much noise can be removed that it makes it easier to fall asleep as the sound from the other passengers also disappears. One of the best and most compact noise-canceling headsets is the AirPods Pro from Apple, in addition to this noise-canceling headset, it is also wireless.

You can choose to use a noise-canceling headset without sound in your ears, but if you choose to turn on music, this will cause almost all background noise to disappear.

We've used AirPods pro on quite a few transatlantic flights, and we'm very happy with them. The advantage of AirPods Pro is that they sit inside the ear and therefore do not disturb if you try to sleep when the side of the head faces the headrest on the plane.

Some people find background noise very disturbing when going to sleep, so if you are one of them and you want some sleep, be prepared to have some good quality earplugs so you can be sure that you can get some sleep when you need it.

Situations where you want to sleep, but there may be noise that makes it difficult for you to sleep, are primarily when you are out flying long and at night. On an airplane, there is a constant noise from the airplane's engines which can be annoying if you want some sleep, but other than that you never know who you will be close to in the airplane. Maybe there are small children near you, someone who hears loud music or someone who snores. All of this can ruin your chances of getting some sleep if you find it difficult to sleep when there is noise.

When you arrive on your holiday, there is a big difference in how much noise there can be from your room, if your room is located against a courtyard, then it may be quiet outside, but if the walls in the hotel are not special soundproofing, so it can be annoying when there are people walking in the hallway talking, or maybe there is also noise from your neighbor's room. You can also get a room that overlooks a road or a square, and although this can be a good view, it is often just as significant with more noise, if the hotel is located close to nightclubs and bars, then there may be also be more noisy during the weekend at night.

Power has gradually become such an important thing, as you have more and more things lying around on your phone such as boarding passes and credit cards. Therefore, it can cause panic when one's phone reaches down in the red field for how much power is left on one's phone.

Although more and more planes have a USB input at each seat so it is possible to charge your phone at the seat, not all planes have it yet. So it is not always known in advance whether to fly with a newer aircraft or an older aircraft without a USB input at the seat. If you have your own powerbank, on the other hand, you can be sure to have power at hand, this applies not only when you are on the plane, but also when you are on your way to the airport, when you are waiting at the airport and on your way to your hotel.

There are powerbanks in all sizes, and it is now possible to get many powerbanks that can hold a lot of power. We have found a powerbank which has 26800mah, which means that you can charge your smartphone up to 6 times or your tablet twice.

5. Smartphone holder for the plane

Whether you are going on a short flight or a longer flight, it is always good to have entertainment along the way, an episode of your favorite series or a movie can help make the holiday more enjoyable. Of course, not all aircraft have an entertainment system installed in the seats, for the most part it is only on long-haul flights to either Asia or North America that such an entertainment system is found. In addition, not all airlines have an equally wide and exciting film range as other airlines have.

It may therefore be worth having some series or movies from Netflix downloaded to your phone so you know there is something you would like to see. And to be able to watch movies without having to bend your neck too much, you can buy a holder for your smartphone, which can be placed at the folding table in the seat in front of you.